How to Build a Smartphone USB Based Controller Systems 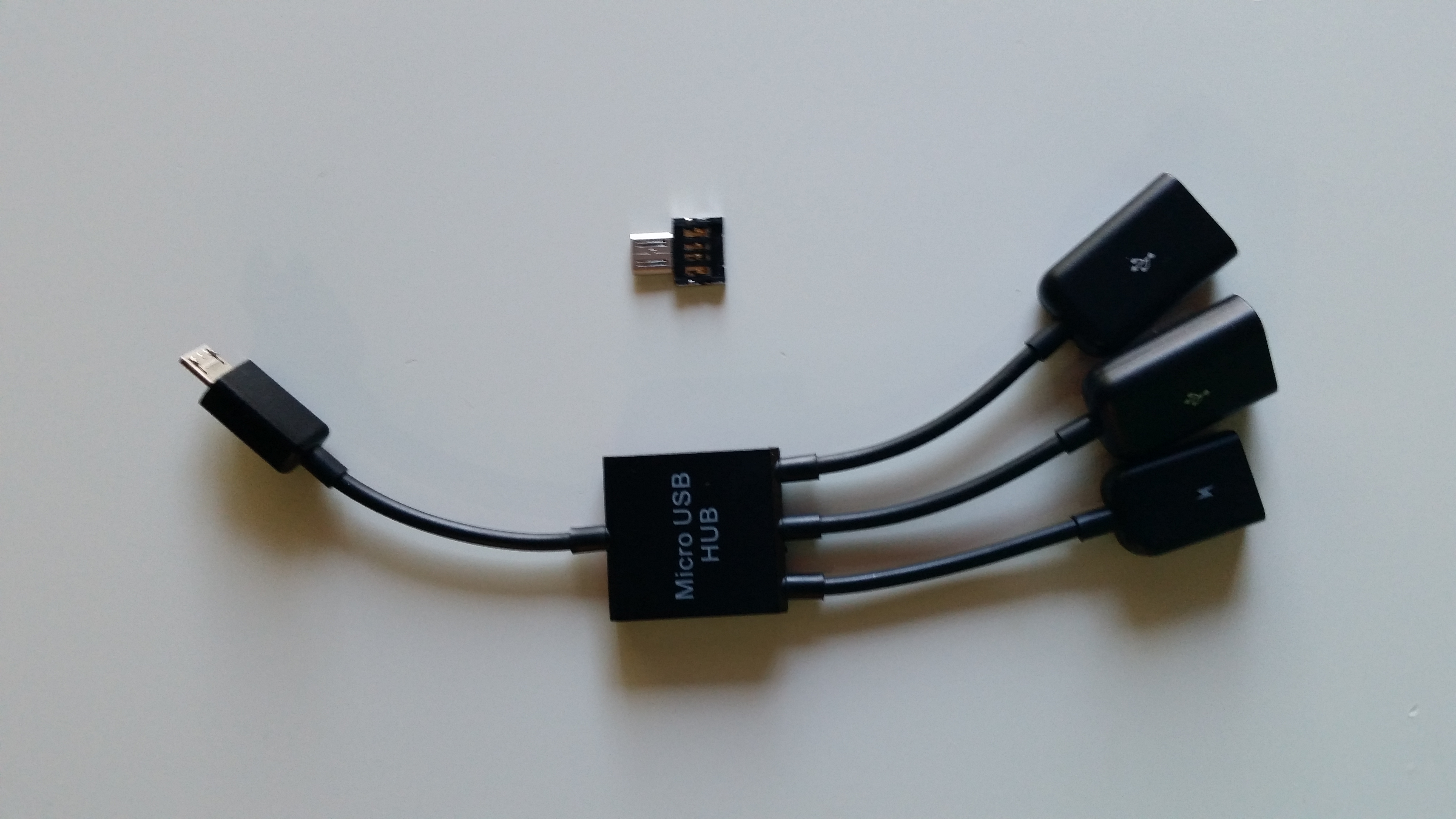 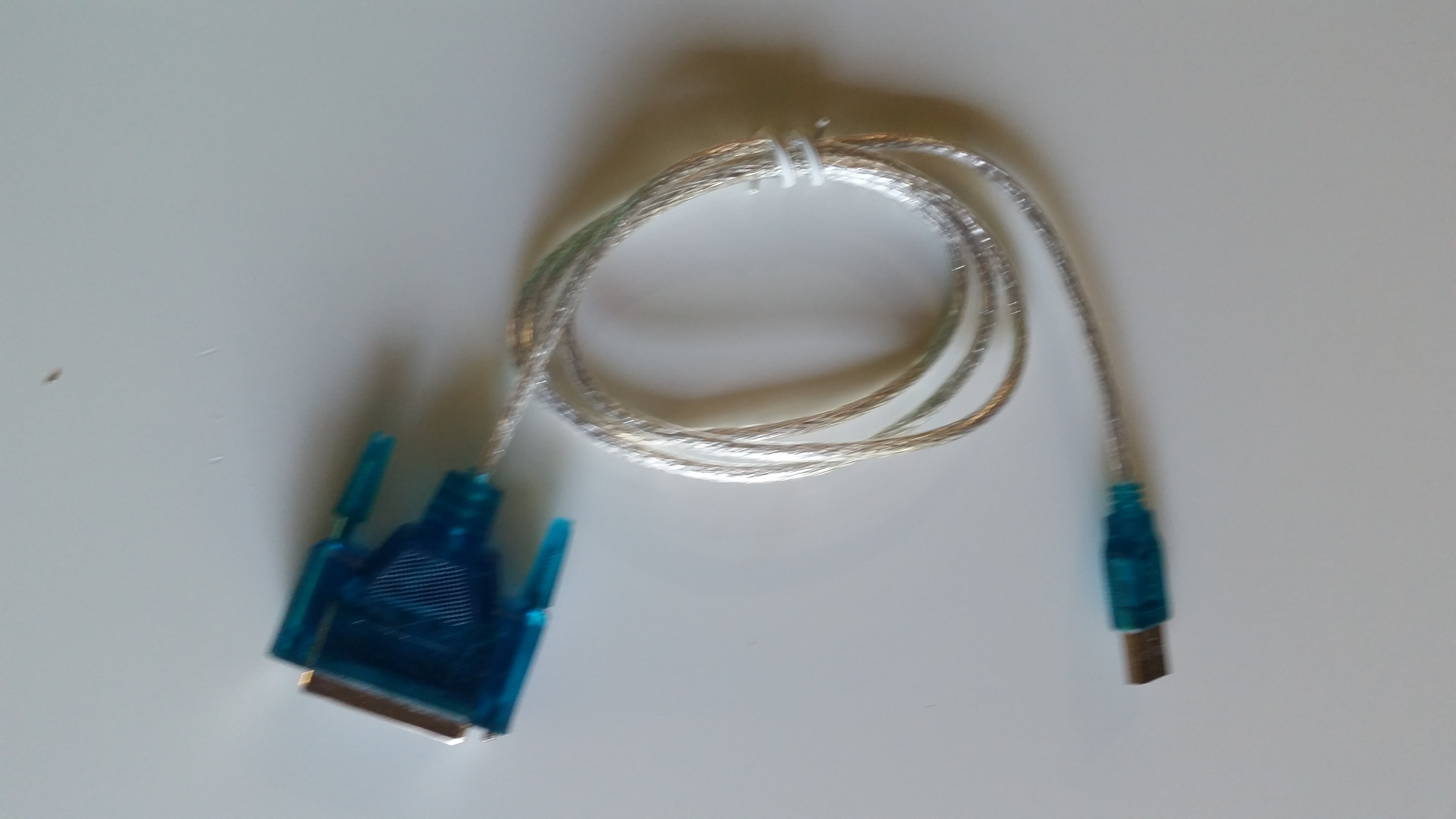 also known as an Android device that supports USB-Host mode

The USB interface is directional with one host that can communicate with a number of connected accessories. The connector on many smartphones only allow them to be an accessory. This allows the smartphones to be charged or connected to a personal computer to sync data such as photos. However, some smartphones, such as the Android Samsung S# series, allow an adapter to be plugged in that then allows USB accessories to be plugged in directly to the smartphone as a host. An example of this would be to plug in a USB memory stick to an Android smartphone with USB-OTG which then allows the user to use the Android File Manager to look at or move files to the USB memory stick.

With a smartphone with USB-OTG support and an adapter, you can connect a USB to parallel port cable. Parallel ports were designed for early dot matrix printers. Early dot matrix printers had a print head consisting of a row of seven to nine metal pins connected to solenoids. When power was applied to the solenoids, the pin was pulled forward to strike the paper and leave a dot. The parallel port was designed to make it simple to set or clear these pins. However, instead of a printer head, a parallel port could control any number of other items like turning on an electric motor for a wheel on a robot or switching on or off a control valve for a thruster on a spacecraft.

If you want to use the parallel ports data bits to control items like an LED light or an electric motor, depending on your parallel port, you will probably need electronics that respond like an older printer. Otherwise you'll only be able to send one byte, which will cause the computer to think that the printer is busy and it won't send any more bytes of data. The parallel or centronics port handshake uses the following pattern.

First, data is presented on the parallel port pins 2 to 9 representing data bits 0 through 7. The computer then lowers the Strobe line (pin 1), waits a minimum of 1 μS, and then raises the Strobe line. The data bits would normally be read by the printer on the rising edge of the Strobe line. The printer electronics would indicate that it is busy processing the data by raising the Busy line (pin 11). The computer then checks to see if the printer electronics are indicating it is busy, and waits for the Busy line to go low. Once the printer has accepted data, it will acknowledge receiving the data by a low pulse, about 5 μS, on the Ack line (pin 10). Quite often the computer will ignore the Ack line to save time, but it won't ignore the Busy line.

For this to work you need both your operating system (OS) and hardware to support USB-OTG. USB host mode is directly supported in Android 3.1 (API level 12) and newer platforms. Windows Embedded Compact is reported to support USB OTG as of Windows Embedded CE 6.0. Windows 10 introduces support for USB Dual Role or OTG connectivity. However, the app we're suppling is only for Android 4.0 or later.

Determining which smartphone hardware supports USB-OTG or USB host is a little hard because you have to have a USB device attached to the Android device in order for the software to determine if USB-OTG is supported. To check your hardware, download the Android USB-Controller app to your Android smartphone that you think has USB-OTG support.

Then plug in a USB-OTG adapter to the smartphones USB port and a USB to parallel port cable to that adapter. Run USB-Controller and select the USB Host Check. This will tell you what USB devices were identified as being connected to your Android device, or it won't recognize any devices. If the later occurs, then your Android device doesn't support USB-OTG (aka USB-Host). 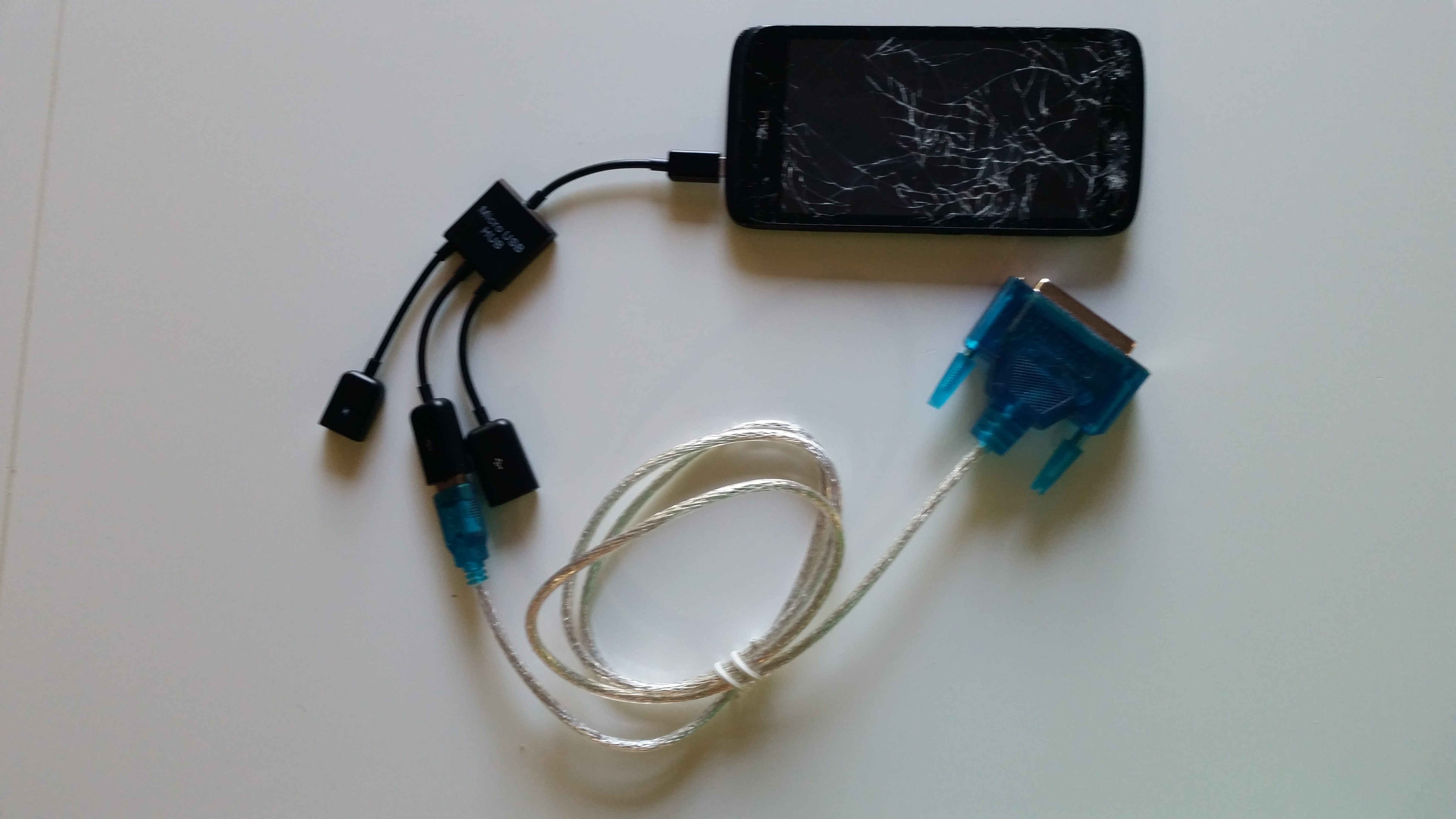 
I've confirmed that Samsung Galaxy S5, S6, and S7 support USB-OTG. The list of devices that should support USB-OTG includes (but is not limited to):

If you have confirmed that other smartphones or tablets support (or is on this list and doesn't support) USB-OTG please email us at teraKUHN so we can update the list for others.

As mentioned above, any electronics you wire up may need to respond as printer electronics would. The most common handshake you will need to produce is to raise and lower the Busy line (pin 11) after the Strobe line is lowered and raised indicating data is available. In order to do this you could just invert the Strobe line and delay it slightly. This can be done with a transistor circuit to invert the Strobe line signal, and then an RC (resistor/capacitor) circuit to delay that signal. The RC circuits output is then fed back into the Busy line. The RC circuit generates the delay in the signal based on the time constant of it's components. When an increasing DC voltage is applied to a discharged capacitor, the capacitor charges, and when the voltage is reduced over a charged capacitor, the capacitor discharges. This charging and discharging of a capacitors energy is not instant If a resistor is connected in series with the capacitor forming an RC circuit, the capacitor will charge or discharge slower through the resistor. The time constant T of an RC circuit, is measured in terms of T = R x C, in seconds, where R is the value of the resistor in ohms and C is the value of the capacitor in Farads. The bigger the combination of R and C in your circuit, the longer the data bits will be held in their state before then next pulse of data bits. To provide the small amount of current this circuit needs, you can leverage the Linefeed, Reset, or Select-Printer lines which are outputs that should be held high (5v). Here's a diagram of the circuit you want to wire up. 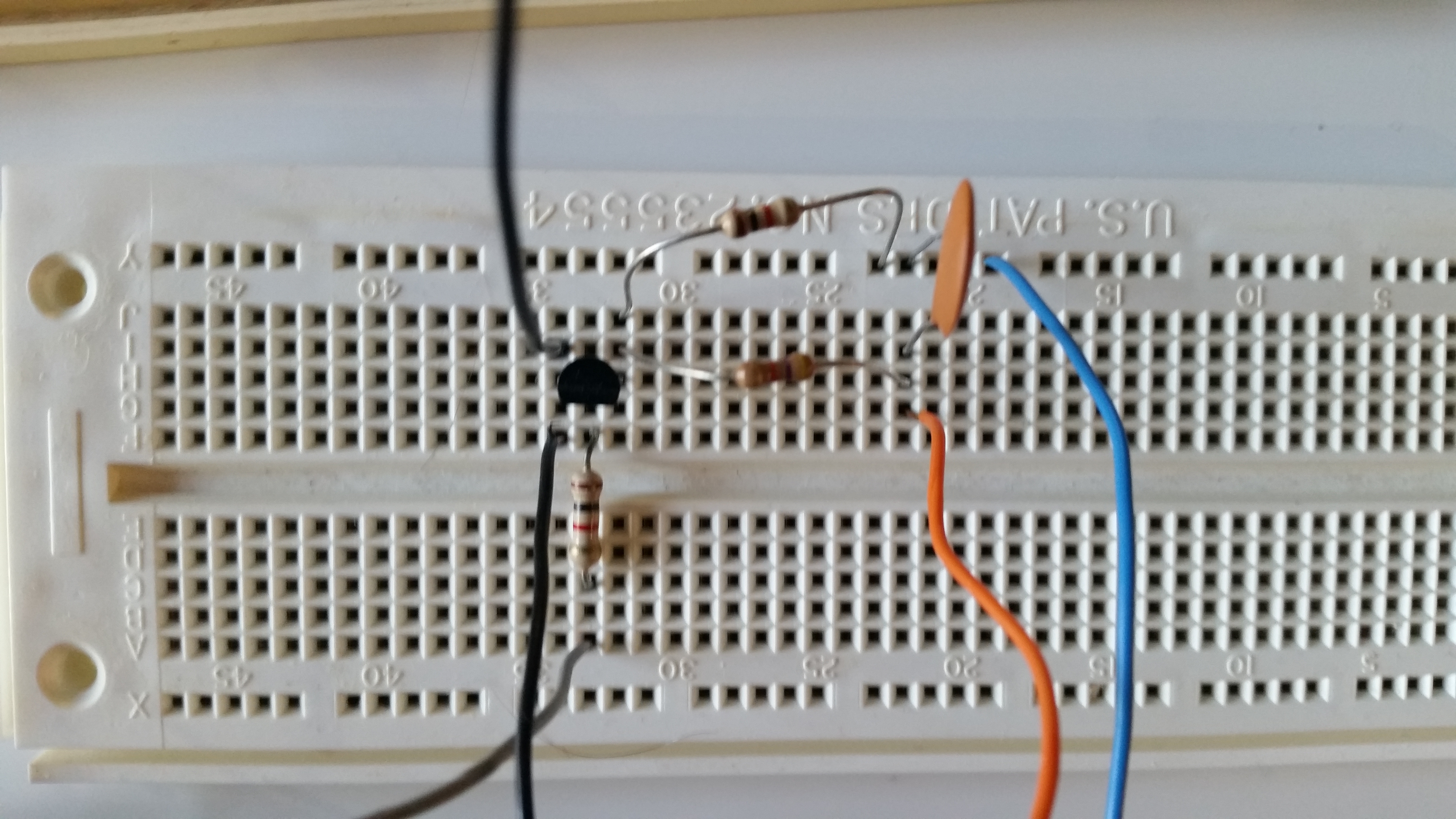 You typically shouldn't wire up a digital output directly to a motor since a motor will probably draw more current than the digital output is rated for. Instead you should have a small amplifying switch circuit, and a separate power supply to drive the motor. This can be done with a transistor circuit to amplify any of the 8 digital output signals from the parallel port. A diode and capaciter in parallel to the motor prevents problems with the circuit when the motor is stopped and it momentarily acts as a little generator. This circuit can be used for driving a small motor from just about any digital output like an Arduino, PC parallel port, etc., not just this project. Here's a diagram of the circuit you want to wire up. 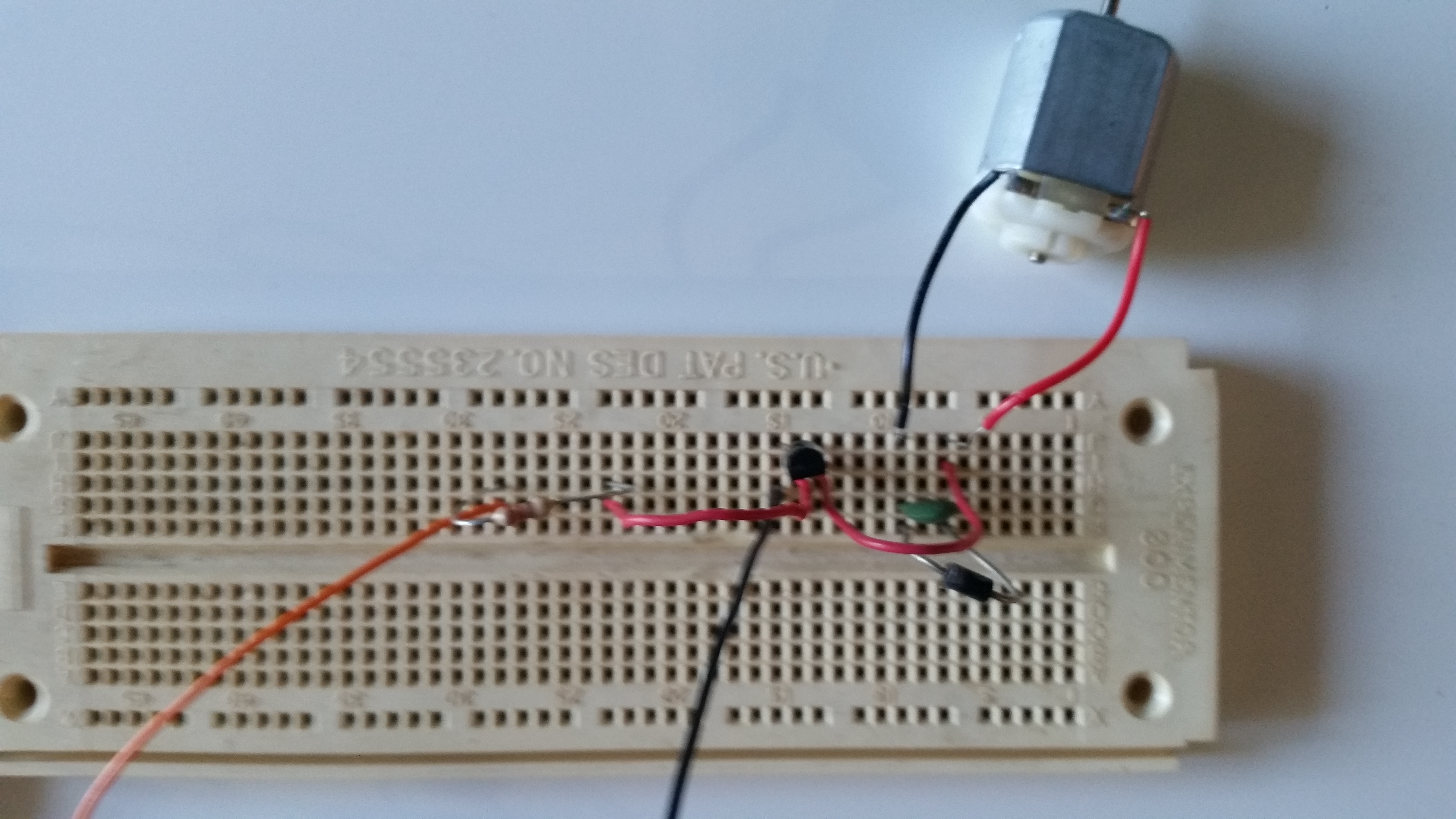 5) use USB-Controller to control the parallel port

In order to do this, you can use the Android USB-Controller app that you downloaded to your Android smartphone earlier.

Set the bits you want to turn on and the select the Send Data button. The data will be held as long as a pulse count is running. The pulse count can be set in the USB-Controller apps Settings.

Alternatively, instead of using a pulse width modulated (PWM) signal, you could build a digital logic circuit that latches (saves) the data ports triggered by the Strobe line. You would then connect any motors or lights to the output of these latches. This might be a better solution for some, but would then require a more complex circuit and a separate power supply for the digital circuit. You could still use USB-Controller to send the data by using it's Settings to set the pulse count to 1. 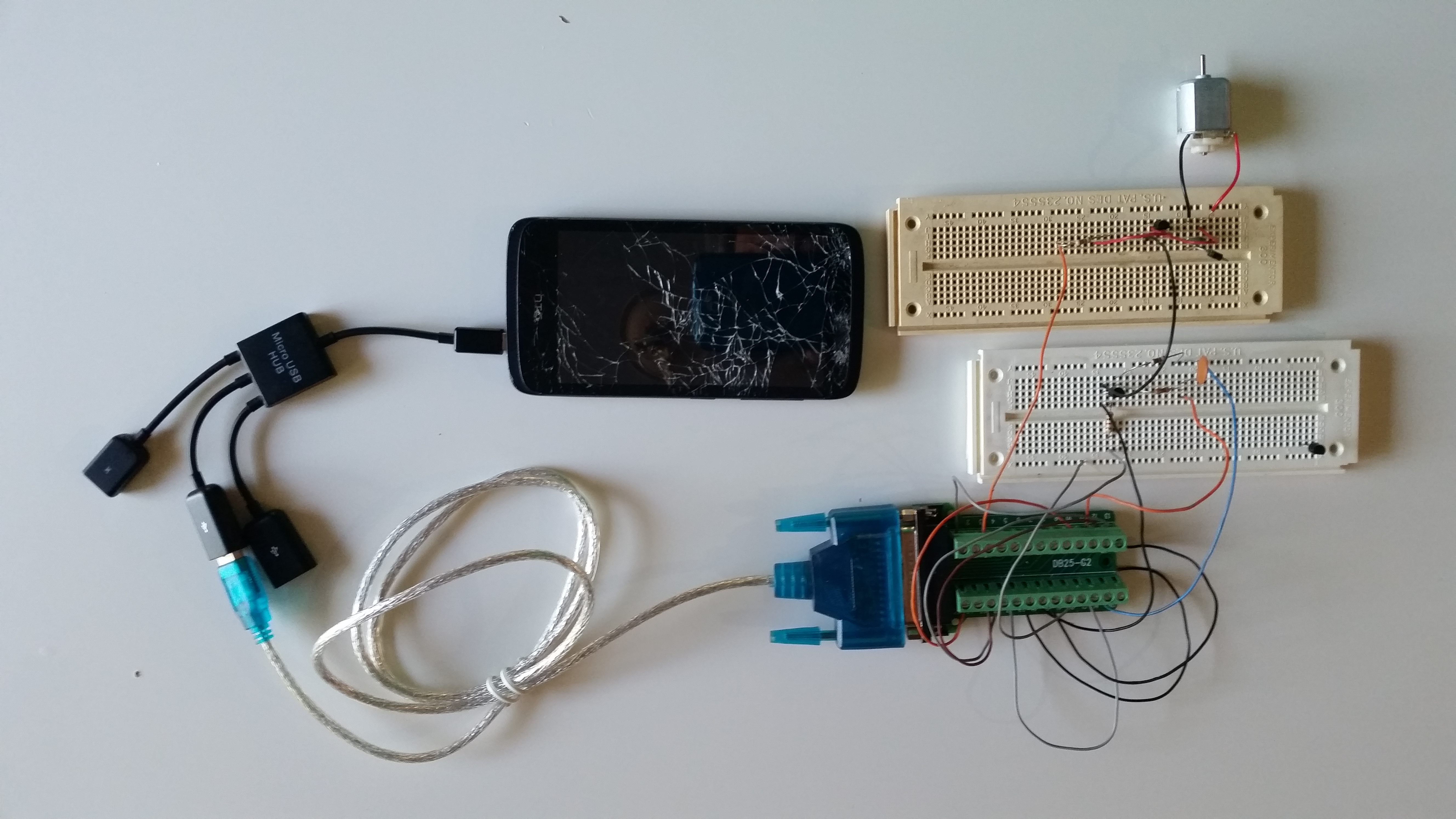 Advanced: 6) Build a latch and bi-directional Motor circuit and wire up a motor with an L293 / SN754410 half H-bridge driver

You can't wire up a digital output directly to a motor and be able to control the motor in three different states: stopped, forward, reverse. Instead you will need two digital outputs, one to control direction and one to turn the motor on and off. However, the circuits described above for direct motor control rely on PWM and that won't work for this circuit. Instead you will need to build a latch circuit that saves the state of the data ports between pulses on the Strobe line. This can be done with a number of latch circuit chips (aka flip-flops) such as the 74LS171, 74LS173, 74LS174, 74LS175 ICs that can handle 4 or more bits. This example uses a 74LS174, .

You then need a circuit called an H-bridge in order to be able to switch the current direction to the motor. This could be built from scratch with transistors, but it's such a popular circuit you can get ICs that have H-bridge or half H-bridge circuits. The L298 is a popular dual packaged full H-bridge IC, while the L293 (aka SN754410) is a popular quadruple package half H-bridge IC. You can use two half H-bridge circuits with a little other circuitry to form the equivalent of a full H-bridge so these two ICs offer similar capabilities. For this example we use an L293 since it's easier to put this chip into a solderless breadboard. By using a digital inverter such as a 74LS04, we can tie two half H-bridges driver inputs together so that one always has the opposite state as the other. Here's a diagram of the latch and bit-directional motor circuit you want to wire up.

Also note that with this circuit you will not need the simple motor circuit described above. However, you will still need the strobe to busy circuit. To send the data from your smartphone through USB to the parallel port, you can either use USB-Controller (free or Pro) with the pulse count in Settings set to 1 or use AVR-Controller Pro.

for Android smartphones
Link to AVR-Controller

Keep in mind that USB-Controller (free or Pro) or AVR-Controller Pro work through USB-OTG. USB has a host/accessory or host/peripheral topology and protocol. Normally a computer is the host and the accessory may be a USB flash drives, USB mouse, USB keyboard, USB printer port, etc. or even a smartphone or tablet. USB-OTG allows USB devices, such as smartphones or tablets, to switch from acting as accessory to act as the host, allowing other USB devices, such as USB flash drives, USB mouse, USB keyboards, and USB printer ports to be attached to them. Here's the catch, when this switch happens, the smartphone or tablet becomes the power supplier of the USB peripherals. While you can get a USB-OTG host hub that you can plug a USB power supply into, that USB power supply only goes to the USB peripherals, not to the device acting as the host.

USB-Controller and AVR-Controller were meant for mobile robotics projects like: Android smartphone (ARM) controlled Snap Rover robot where mobility is more important than duration. To keep a smartphone powered on longer, you might need something like wireless charging or a power supply that you can plug into the smartphone instead of its battery. You will not be able to power the smartphone through it's USB port.

If your scenario is one where duration is more important than mobility you should look at PC based Controller Systems. It's the same concept as that presented here, but using a PC instead.

On the other hand, you could look at Arduino based Controller Systems.


Copyright (C) 2017 - 2021 R. J. Kuhn. Please note that you are not allowed to reproduce or rehost this page without written permission.