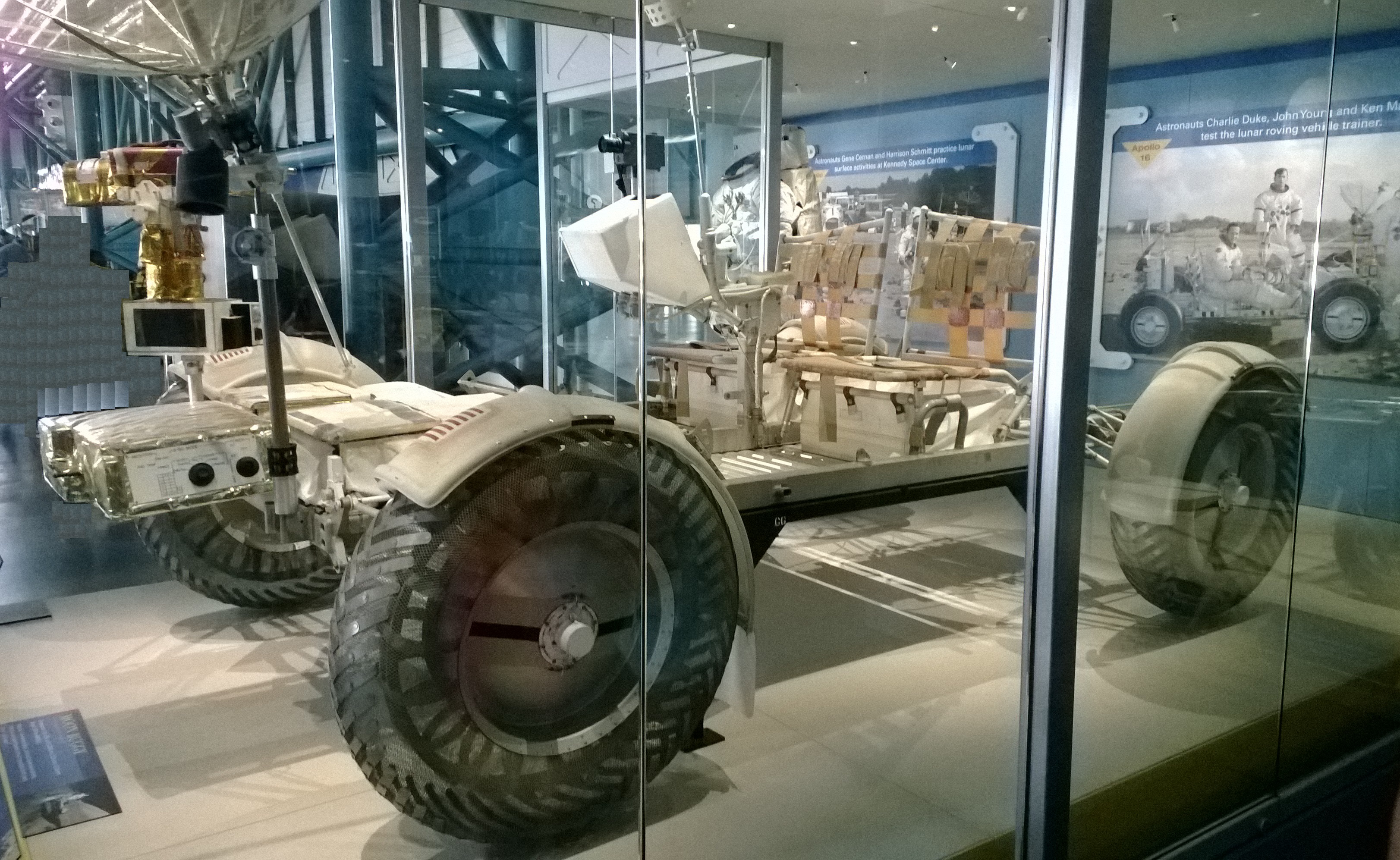 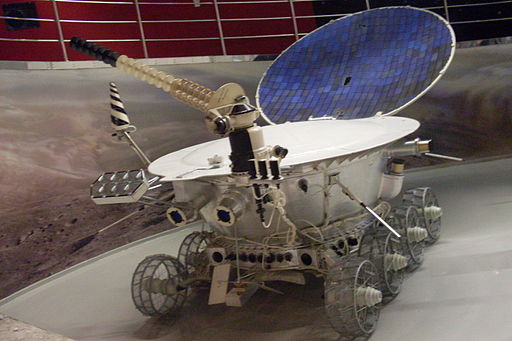 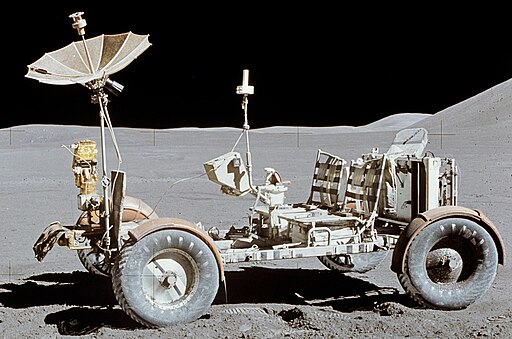 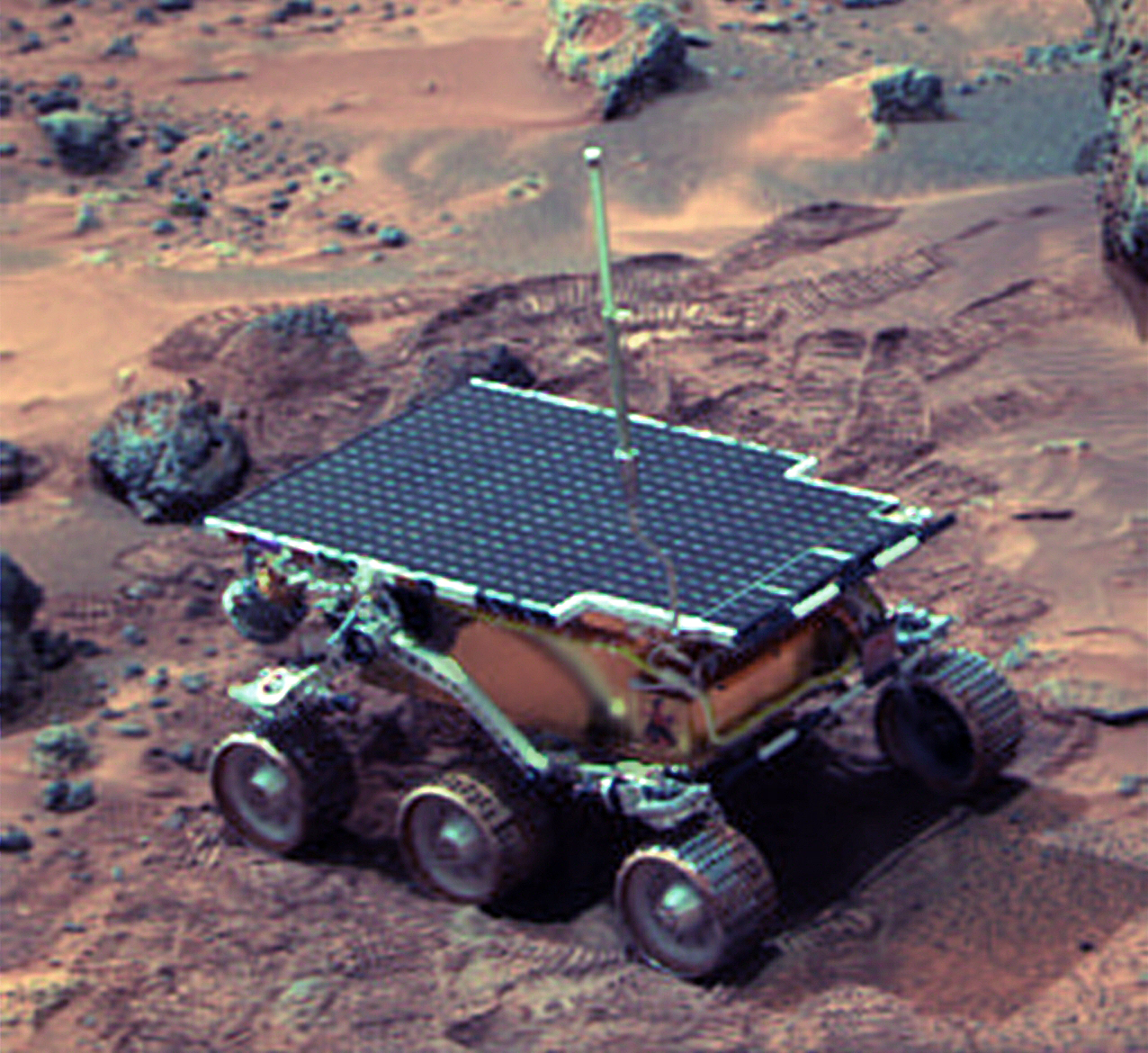 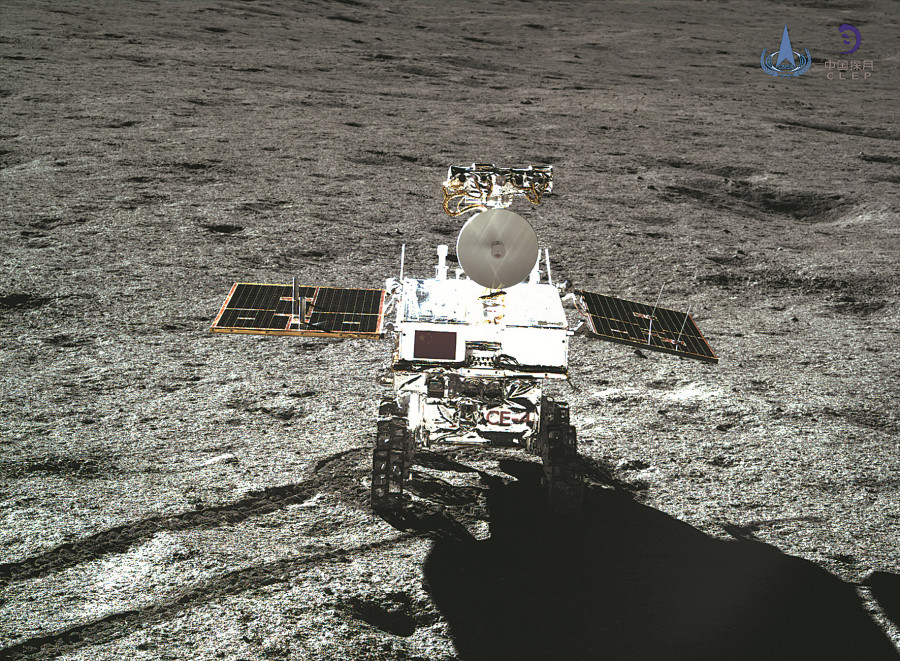 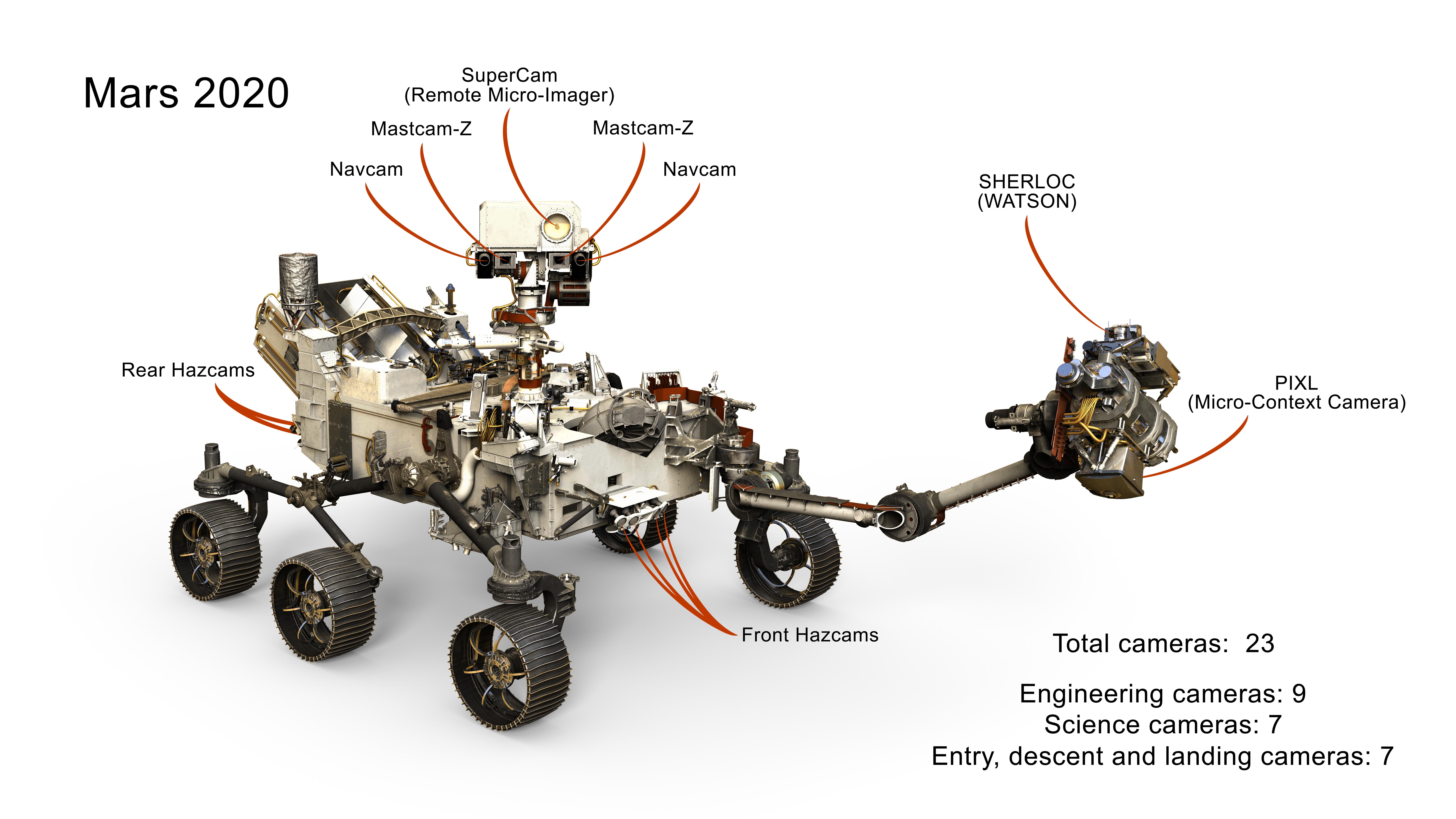 Cameras of the Perceverance Mars Rover

A rover is a vehicle designed to move across the surface of a celestial body. For the US Apollo program to the Moon the rover was the Apollo Lunar Roving Vehicle which was added to the program for Apollo 15, 16, and 17. For the USSR N1/L3 program to the Moon the rover was the Lunokhod which was sent to the Moon separately from the planned N1/L3 program and driven remotely. China has recently sent autonomous rovers called Yutu to the Moon. Autonomous rovers have also been operated on Mars. These include Sojourner, the MERs Spirit and Opportunity and Curiosity. The NASA rover Perseverance, which is similar in design to the Curiosity rover, is set to land on Mars on Feb. 18th 2021.

It's important that drivetrains be designed so that the rover won't get stuck. There are no roads on the Moon or Mars so rovers are like off road vehicles. There's also nobody to call to pull them out if they do get stuck. There are also differences in the gravity on the Moon and Mars which would lead to differences in how the suspension and mobility systems would be built.

All of these rovers used electric motors to drive wheels, but they didn't use the same drivetrains or batteries. The Apollo Lunar Rovers had four wheels similar to a car. The wheels consisted of a spun aluminum hub and an 81.8 cm diameter, 23 cm wide tire made of zinc coated woven steel strands. Titanium chevrons covered half of the contact area to provide traction. Each wheel had its own electric drive, a DC series wound 190 w motor capable of 10,000 rpm, attached to the wheel via an 80:1 harmonic drive, and a mechanical brake unit. The Lunokhod rovers had eight wheels. Each wheel had an independent suspension, motor, and brake. The rover had two speeds, ~1 km/hr and ~2 km/hr. Mars rovers, like Lunar rovers, have also used electric motors. However, Sojourner and subsequent US Mars rovers have used six wheels in a rocker-bogie suspension arrangement. Sojourner had six wheels and moved at speeds up to 0.036 km/hr. The rover's wheels and suspension used a rocker-bogie system that is unique in that it did not use springs. Rather, its joints rotated and conformed to the contour of the ground, providing the greatest degree of stability for traversing rocky, uneven surfaces. A six wheeled vehicle with rocker-bogie suspension can overcome obstacles three times larger than those crossable by a four wheeled vehicle of equal wheel size. For example, one side of Sojourner could tip as much as 45 degrees as it climbed over a rock without tipping over. The wheels were 13 cm in diameter and made of aluminum with stainless steel cleats for traction. Three motion sensors along Sojourner's frame detected excessive tilt in order to stop the rover before it could tip over. Sojourner was capable of scaling a rock on Mars more than 20 cm. The Mars Exploration Rovers Spirit and Opportunity each had six wheels. Each wheel had its own individual motor. The design of the suspension system for the wheels is similar to the rocker-bogie system on the Sojourner rover. This system causes the rover body to go through only half of the range of motion that the wheels could potentially experience without a rocker-bogie suspension system. China's Yutu rovers each had six wheels.

Most rovers have used electric batteries, or batteries partnered with solar panels. It's important that batteries are light weight, can hold a charge, and if partnered with solar panels can be charged efficiently. For the Apollo Lunar rovers, power was provided by two 36-volt silver oxide zinc non rechargeable batteries with a capacity of 121 amp-hr. For the Lunokhod rovers, power was supplied by batteries charged by a solar panel on the inside of a round hinged lid which covered the instrument bay. Sojourner used 9 lithium thionyl chloride (LiSOCL2) D-cell sized batteries. It also had 13 strings of 18, 5.5 mil GaAs solar cells each, for a total of 0.22 square meters. This combined batteries/solar panels provided Sojourner 30W of peak power (mid-sol) which included 16W peak solar panel production. The the MERs (Spirit and Opportunity) used lithium ion batteries similar to what is used today in most smartphones and laptop computers. The Curiosity rover also used lithium ion batteries along with a radioisotope thermoelectric generator. China's Yutu rovers power supply included solar panels.

The Apollo Lunar Rovers had a simple navigation system to help the astronauts know how far and in what direction the Lunar Module was. Using cameras on the Lunokhod rovers, a five person team on Earth sent remote control driving commands to the Lunokhod rover in real time. More recently, the Sojourner rover used an 8085 processor to aid navigation, guidance, and control, and the MERs Spirit and Opportunity, and the Curiosity rover have all used Power processors along with sensors and electro-mechanical actuators for this purpose. Sojourner rover software was written with the ANSI C programming language, and consisted of a single-threaded control loop, with interrupt handling only for exception condition. The control loop performed periodic functions, requested command sequence uplinks, and dispatched commands to the appropriate command handlers. Command and telemetry for the Sojourner rover was provided by modems on the rover and the Pathfinder lander. The rover would request from the lander transmission of any commands sent from Earth. When commands were not available, the rover would transmit any telemetry collected to the lander which in turn forwards them to Earth. Commands for the Sojourner rover were generated and analysis of telemetry was performed at the rover control workstation on Earth. Commands received by NASA's Mars rovers would not be executed in real time, but rather would be a sequence of operations to carry out during the day. This necessitated a degree of autonomy on the rovers so that they would prevent themselves from getting stuck on a regular basis. Little detail is available on navigation, guidance, and control of China's Yutu rovers.

While Mars is farther from the Sun than the Earth and the Moon and thus colder on average, the 14 days of sunlight followed by 14 days of night on the Moon causes much larger termperature variations than on Mars or Earth. Further the effects of the atmosphere and oceans of the Earth, aren't available to transfer heat from places in sunlight to places in shadow on the Moon. The Apollo Lunar Rovers only had to work on the Moon during the duration of the manned mission which was only a couple of days during Lunar morning. However, even though they only had to work for a couple of days, the Apollo Lunar Rovers were never parked in the shade of the Apollo Lunar Module because they would get too cold there. The rovers used tanks filled with paraffin wax to store excess heat from electronics while driving. The heat would melt the paraffin wax. This heat would then be released through mirrored radiators when the rover was parked causing the paraffin wax to solidify. Unlike Apollo, the Lunokhod rovers survived from 4 to 10 months on the Moon. The Lunokhods had solar panels mounted on the underside of a lid. During the Lunar days, the lid was open and the solar panels were exposed to the Sun to generate electricity. During the Lunar nights, the lid was closed to allow a polonium-210 isotopic heat source to keep components at operating temperature. The Yutu rover went to sleep during lunar nights. Similar to the Lunokhods, it used radioisotope heater units which used plutonium-238 and two-phase fluid loops. China's Yutu rovers also used radioisotope heater units using plutonium-238 and two phase fluid loops. Mars rovers have also used radioisotope heater units along with electrical heaters; however, they haven't had to deal with significantly higher day time temperatures than night time temperatures as found on the Moon. Finally, the private company LunaCorp, which had plans for a Lunar rover, had plans at one point that called for continuously driving the rover in the direction of the Sun at a high latitude, to keep the rovers solar panels always in sunlight and to keep the temperature relatively consistent. 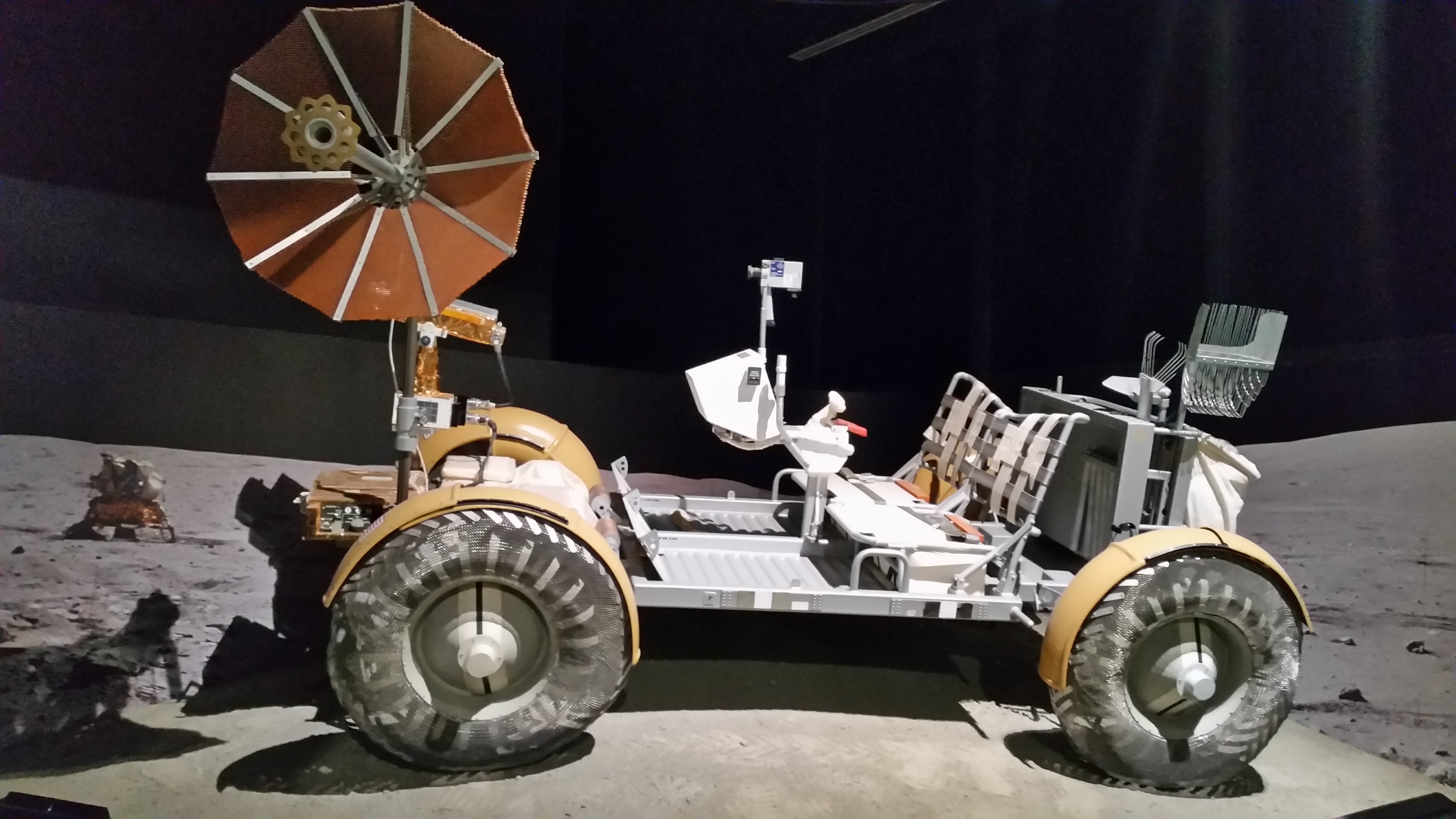 Sojourner: An Insider's View of the Mars Pathfinder Mission by Andrew Mishkin (2003-12-02)

Roving Mars: Spirit, Opportunity, and the Exploration of the Red Planet

Mars Rover Curiosity: An Inside Account from Curiosity's Chief Engineer

For students who want to experiment with a working example of an autonomous rover, in addition to the Moon or Mars, rovers can operate on Earth. Before building anything it's a good idea to know what you're trying to accomplish. For example, if you want to build an autonomous rover, are you building it to take photos, make scientific measurements, dig a hole, or setup a terrarium or greenhouse? That will tell you something about what sensors and actuators your rover will need in addition to its drive mechanism. If you want to build your own autonomous rover, you could start from scratch, or you might be able to leverage components that already exist.

Thus, the three general options to consider if you want to build a simple rover are:

1) Build from a Robotics Kit or Construction Set

There are many robotics kits and construction sets available commercially that you can use to build a rover. These can be powered by batteries similar to what was used in Lunar or Mars rovers, and they quite often have a control system based on a processor that is similar to those used on Mars rovers. While robotics kits can be easy to build and inexpensive, they don't allow from easy modification from what they were designed to do. On the other hand, robotics construction sets allow for a lot of customization, but tend to be more expensive. Some common robotics construction sets include:

2) Build from an R/C vehicle

There are many toy remote control (R/C) cars and trucks available commercially that you can use to build a rover. The key difference between an R/C vehicle and a rover is that an R/C vehicle typically doesn't have a control system or processor, but rather constantly relies on a human to guide it. To turn an R/C vehicle into a rover you would need to add a control system and the necessary electronics to control the motors with it and the necessary software to provide some automated operation. You will also probably want to have some navigatational input sensors to guide a steering mechanism, and maybe some environment sensors and environment manipulators. Here are some exaples of autonomous rovers built from R/C vehicles.

For this you will need:

Again, you will also probably want to have a steering mechanism, navigatational input sensors, and maybe some environment sensors and environment manipulators.

Some retailers for electronics and other parts are: