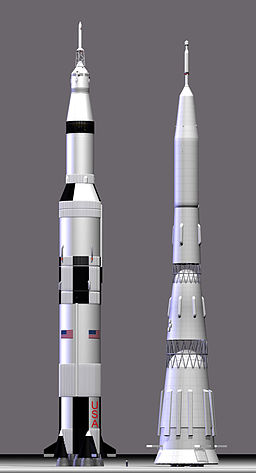 In addition to Apollo, Zond, and N1/L3 programs, other launch systems have successfully launched autonomous spacecraft that safely landed on the Moon or went into orbit around the Moon. These include the Atlas Centaur, Molniya-M, Delta II 792X, Atlas V, Long March, and others.

Rockets use various methods to compensate for air turbulance and adjust their direction of flight. This might include fins on the outside of the rocket, vanes in the engine exhaust stream, or gimballed engines which can change the direction of the nozzle. To control these mechanisms the rocket might have an electronic guidance system. The Saturn V had a section called the Saturn V Instrument Unit. This unit included the ST-124-M3 inertial platform, and the launch vehicle digital computer (LVDC). Note that the LVDC is not the same as the Apollo Guidance Computer (AGC) which was used both in the Apollo Command Module and in the Apollo Lunar Module.

The Delta II booster is controlled by the second-stage avionics system which provides guidance, flight control, and vehicle sequencing functions during the booster and second-stage phases of flight.

Finally, here are some links to interesting rocketry projects: